Yesterday Alasdair Cochrane from Sheffield University came down to work on a paper with me (buy his excellent little book on animals and political theory here). I’m blogging about it because it’s my first foray into co-authoring. Admittedly, when you take into account presentation, feedback, and peer review, most academic writing is collaboratively written to some degree, but this is different. I thought I’d share how we’ve proceeded in case it’s useful to others, and in case anyone out there can offer us advice.

The paper began as a short, targeted paper (3000 words) which had presented to a conference: Alasdair used the paper as a starting point to develop a broader idea. We’ve spent a day thrashing out a structure together, considered our claims and potential counter-claims, identified key areas of the literature, and assigned starting sections for each of us to draft (with deadlines).

I’m keen to make best use of collaborative tools, so we’re going to have a go at using Googledocs for our first draft. Gooledocs is good, because multiple authors can work on a document in real time, and with differing permission levels. Googledocs also has threaded comments features with primitive work-flow management features (you can mark a comment ‘resolved’). It also has revision tracking features, and it’s ‘Research’ tool allows you to search Google Scholar and insert references while you work. There’s even a real-time chat function.

Later, I expect we’ll import the document into a Word or LibreOffice, use some decent reference management software (I use Zotero), and apply an appropriate template to make it all conform to the publishing guidelines of the journal we’re targeting. The last bit requires that we structure our document properly by using the right heading levels and so forth.

So far, the process has been fun and productive – I’m looking forward to continuing the process. Anyone out there care to share experiences of give tips?

Some time last year I wrote the essay below; I can’t remember what I wrote it for, but I’ve just dug it up whilst reorganising my files. I thought it a shame to waste, so I’m sharing with you.

For anyone who believes that human beings, or perhaps more properly, human persons, have moral duties to non-human animals for their own sakes, key features of animal conservation should be both troubling and problematic. The reasons for concern rest in the way conservation debates are framed together with the nationalistic language used, and the implicit sentiments that accompany them. Put simply, conservationism sups from the same cup as nationalism and other ideologies that subordinate the value of the individual to that of some larger social grouping. This claim may seem like it is intended to be provocative, but it is made neither to display boldness nor provoke reaction. Rather, the intention is to bring to attention that which has been before us, but which has rarely been perceived.

END_OF_DOCUMENT_TOKEN_TO_BE_REPLACED 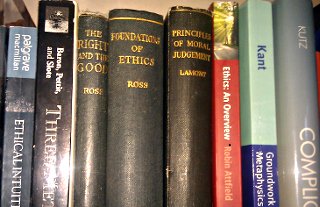 Not so long ago @Kantian3, editor of www.kantstudiesonline.net, pointed me at a section of Lamont’s Principles of Moral Agreement that concerns animal rights (thanks Gary). I’d not read Lamont before, but I’d seen him referenced in Feinberg’s influential paper ‘The Rights of Animals and Unborn Generations‘ so I picked up a second-hand copy on Amazon for a couple of quid. A few days latter a pleasingly cloth bound copy arrived in the post. I’m glad I followed-up on Gary’s suggestion because Lamont’s short argument (Section 66, Chapter 3) is good.

Lamont responds to Ross’ argument by asking: ‘is it true that the “owning of a right” and the “moving for its enforcement” must be united in the one person?’iii. Lamont answers his own question by pointing to criminal law and the ability of the public prosecutor to enforce the law in spite of the wishes of an individual victim of crime. In such cases victims cannot waive their rights, and have their claims pressed by another. Lamont also writes of the legal powers of guardians to press claims on behalf of their wards (he uses the examples of children and ‘idiots’).iv By denying rights to animals, Lamont thinks that Ross confuses possessing a right with the ability to ‘initiate proceedings for the defence of a right’.v Non-human animals are conative beings with interests that they pursue, and it is this, claims Lamont, that makes them the bearers of legal rights – the inability to press a claim presents no real practical or conceptual barrier to rights possession.vi

What stuck me about Lamont’s argument with Ross is just how much it pre-empts contemporary debates between Will and Interest theorists of rights, and also just how influential it clearly was on Feinberg’s paper. I certainly recommend reading it – Lamont’s writing is clear and concise, and I’m definitely going to delve further into the book myself.

On Thursday I learned that have been awarded a one year post-doctoral research fellowship – something I’m overjoyed about. This means that I will be able to spend the next year researching stuff that I’m really interested in (the use of violence in defence of animals and the environment). Great.

However, yesterday I discovered that this post-doc position is funded by in large part by the income generated by the publication of an academic journal. The deal done with a publisher by the society that will fund my research pays not only for my fellowship, but also for two PhD studentships, a big conference, numerous smaller seminars and events, honoraria for journal editors, and other grants to students. Indeed, I learned today that a friend not long ago received a grant from the society to help with his PhD costs.

So, the publication of this journal funds quite a lot of research and dissemination activity, and helps contribute to a flourishing research community. It also provides a lifeline for struggling students to complete their research.

All of this means, that if the journal becomes open access, something being seriously considered by the society, then a lot of the funding stream that pays for all of this research, and provides development opportunities for early-career scholars, will dry up.

Before I knew this I had, unreflectively considered open access to be an unambiguously good thing: now I’m not so sure.

Tools that make my life easier

Philosophy on the Web