Earlier today a lovely friend of mine shared this picture in response to an objectionable arse who was trying to deny that women suffer oppression in all sorts of ridiculous ways – many of which constituted a flat-out refusal to accept the reality of women’s lived existences. 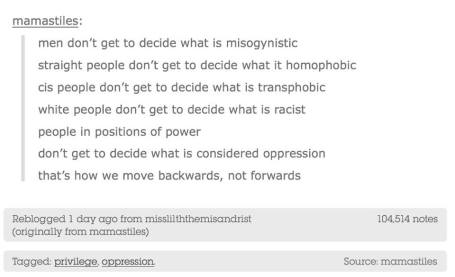 That guy was clearly wrong to deny that women suffer from sexism, misogyny and injustice. However, the response, although common and very popular, was also wrong. We can see how wrong it is by looking at what it is premised upon and what it leads us to conclude.

This claim is made on the basis of the fact that Ps know what they experience, but other people do not. If a P claims that they suffer injustice, and a Q denies it, then the Q is wrong because they lack access to the standpoint that the P comes from. Thus:

If a P claims to be suffering injustice, then a Q must either accept their claim or remain agnostic; the Q cannot deny it unless another P says that Ps are not suffering an injustice. But then the Q cannot know which P is correct. If Ps disagree about whether they suffer injustice then Qs can only ever remain agnostic. If Ps can disagree about whether Ps suffer injustice, then it seems like:

At the same time:

So, if a P says that they suffer injustice, a Q knows that that P may be wrong, but cannot know whether they are wrong. At the same time, the Q would be wrong to say that either of the Ps is wrong about it. If another P says that the first P is wrong, then Q knows that it’s possible that either of them could be wrong, but that it would be wrong to agree with either. If Ps can be wrong about injustice, and Qs have no way of knowing whether Ps are wrong or right when they claim to be suffering injustice, then, even if all Ps agree that they suffer injustice, Qs cannot know that they do and can neither agree nor disagree with their claim. To me, this seems ridiculous.

I can see why people make the argument: women feel oppressed (because they are oppressed), but then someone says that they aren’t oppressed, and the natural response is to say ‘I know how I feel, how dare you tell me how I feel! ’ This is because being oppressed is often accompanied by feeling oppressed, and denying oppression seems like it also denies feeling, and we can’t be wrong about how we feel. But, people can be oppressed without feeling oppressed (they might not know that they are oppressed for example), and people can feel oppressed without being oppressed (they can be mistaken about being treated unjustly). The claim can also be: ‘You haven’t experienced what I have, therefore you don’t know what I do.’ – which is also true; we none of us experience what others experience. However, the fact that only we experience what we experience doesn’t make us infallible about moral claims connected with those experiences. Nor does it mean that other people can’t observe the experiences of others and correctly make moral claims about those experiences. I may not be Jewish, but I know that that the horror, indignity, and injustice written about by Primo Levi in If This is a Man was wrong, and if I met a Jew who denied the wrongness of the Holocaust I’d have no hesitation in disagreeing with him or her.

Effectively, the kind of argument I’m addressing here entwines with the subjectivist approach that says morals statements are simply statements about feelings, and we cannot be wrong about our feelings. This means that when someone says: ‘Killing is wrong’, they are really saying ‘I disapprove of killing’. Thus, when two people disagree, they are really disagreeing about how they feel, not about whether killing is wrong. We can’t be wrong about our feelings, therefore we are infallible when we make moral claims, and, what is more, we cannot disagree (so long as we sincerely report our feelings). The upshot of this kind of moral reasoning is that when someone says: ‘P say is being treated wrongly’ their statement must be true, and when someone else says ‘P is not being treated wrongly’ their statement must also be true. One is saying ‘I approve of this treatment’ the other is saying ‘I disapprove of this treatment’, but they have no basis for argument or disagreement – people can have different feelings without their being any contradiction. But, when I say ‘women are systematically treated unjustly because of their sex’ I am not expressing mere feeling, I am making a claim that women are treated wrongly regardless of whether anyone else feels differently. Simple subjectivism just doesn’t capture moral argument; we aren’t infallible when it comes to making moral statements, and we do disagree about moral claims.

Bottom line – guys denying clear injustice against women are wrong. They are factually wrong, and they are usually morally wrong too. Responding to their wrongness with unsound arguments based on subjectivism is a mistake. Doing so is actually counter-productive to the cause of advancing justice: how do we stop men from behaving unjustly, or dismantle patriarchal structures if men cannot know that injustice occurs?

Edit: it was remiss of me not to link to a couple of excellent related blog posts:

Tools that make my life easier

Philosophy on the Web